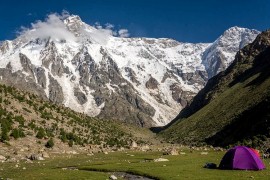 Nanga Parbat, Sanskrit for “Naked Mountain” is so named because some of its slopes are so steep that they are bereft of vegetation and snow. According to the local old legend, Nanga Parbat is also called Diamir, which means abode of fairies. It is believed that the Queen of fairies lives there in a castle made of solid crystal-clear ice, which is guarded by gigantic snow serpents and frogs. The earlier disasters in climbing this mountain are attributed to the displeasure of fairies. Nanga Parbat is not a single peak but consists of 20km long series of peaks and ridges culminating in an ice crest of (8125m). Its South Face known as Rupal Face is (5000m) high, while the North or Raikot Face plunging over (7000m) from the summit to the Indus forms one of the world’s deepest gorge. This expedition takes us to the Southside, which is known as Rupal Face.

Nanga Parbat is the second highest mountain of Pakistan and ninth highest in the world. It is not part of the Karakoram as it is the western extremity of the mighty Himalaya. It is separated from the Karakoram by the mighty Indus River. Since the first disastrous British expedition led by A. F. Mummery in 1895, mountaineers have tried to ascent its summit through different routes but few lucky ones have succeeded. In 1934 four German climbers and six porters perished in a storm. In 1937 disaster 18 Sherpas and 12 climbers were buried alive by the avalanche that covered their camp.  In fact Nanga Parbat has claimed more lives than any other 8000ers relative to the number of attempts, hence the frightening nickname of Killer Mountain. It was first climbed in 1953 by a joint Austrian – German Expedition. Hermann Buhl made the final ascent in a tortuous 41 hours solo ordeal without oxygen. Italian mountaineer Reinhold Messner climbed the south face (Rupal Face) with his brother Gunther in 1970, descending by the Diamir face, where Gunther lost his life in an adventure.

Arrive at Islamabad. Transfer to hotel, after some rest sightseeing at the Old City of Rawalpindi, famous Raja Bazaar, Muti bazaar, and Sabzi mandhi, proceed to Islamabad, new City and capital of Pakistan, Visit Faisal Mosque, Lok Versa museum. Lunch and dinner at a local Restaurant, back to the hotel for Overnight.

Transfer to airport for fly to Gilgit. Upon arrival at Gilgit transfer to hotel for overnight. In case of flight cancellation drive to Chilas (461km, in 10-12hrs) on the Karakoram Highway. Overnight at hotel. The journey on the Karakoram Highway is most exciting and thrilling. It is a monument to the engineering feast and one of the most spectacular roads and the world’s highest metaled border crossing. It connects Pakistan and China stretching over a distance of 1300km between Islamabad and Kashgar, winding through three mountain ranges and following the ancient Silk route along the Indus Valley to the Chinese border at Khunjerab Pass. We pass through the historical town of Taxila, beautiful hill station of Abbottabad, lush green towns of Mansehra, Shinkiari and finally meet the great Indus on Thakot Bridge. From there onward the road snails along the bank of the Indus with contrasting landscape after every two kilometers. We pass through Besham, Dassu, Komila and Shatial to arrive at Chilas with many rocks carving and inscriptions along the way left by Chinese pilgrims and ancient travelers of 5th century A.D.

Early starts by coach to Thalichi and we turn off the Karakoram Highway at  Thalichi drive by jeep towards Astore Valley, which is the launching ground for many treks to Deosai Plateau and expeditions to Nanga Parbat. Before independence, the trek up the Astor Valley and over the Burzil Pass was an ancient caravan route and the only link between Kashmir and Gilgit. The Indo Pak line of control has closed the Burzil. The valley above the gorge is wider with tiny villages perched on either side of the river. The village of Astor is perched on both sides of Rama Gah. Astor road, which has been improved in 1987 passes through the narrow Astor gorge of 30km long with sheer sides.  We will drive to the village of Tarashing, which is last village from where our trekking starts. O/N camp.

From Tarashing to Bahzin (3650m) it takes about 5 hours trekking. Start early in the morning. The trail climbs steeply up the lateral moraine of the Tarashing glacier. After crossing the glacier about in half an hour we continue trekking through the scenic Rupal village with terraced fields of various crops and enjoying ever changing views of Nanga Parbat. After lunch and rest at Rupal Base Camp we climb steadily up a narrow green valley through the groves of willow, poplar and juniper. The mountainside is covered with forget-me-nots, lavender and edelweiss. After about 2 hours we pass a small lake and round the corner is situated Bahzin camp – a flat, green meadow between the lateral moraine of the Bazin glacier and the mountain. Just in front is the ice wall of the eastern face of Nanga Parbat towering above. The Rupal face is gigantic 4500 meters of vertical height stretching almost to the full length of the mountain. O/N camp.

After breakfast at Camp, We start our trek towards Latobo, at the beginning. The trail is steep, then we enter  to the Glacier, this Glacier is longer than Ropal Glacier and wide, almost one and half  hours walking on Glacier we descending to flat meadow, until Latobo Campsite, very beautiful and smooth place for camping, dinner at Camp, overnight in Tents.

Day hike to Sheyi giri, we take our packed lunch along with us, we do our lunch at Sheigiri Camp, afternoon back to Latobo, dinner and overnight at Camp.

This morning we will drive to  Rajkot bridge, continue to Tato village by jeep and Then start trekking to Fairy Meadows. Overnight at Riakot Sarai. Before Raikot we will stop at a view point near Talich to have a view of Nanga Parbat. It was climbed on 3rd July 1953 by Austrian climber Hermann Buhl for the first time. It is a nice view point to take pictures with Indus and Nanga Parbat beyond in the background.

After breakfast day hike around Fairy Meadows, afternoon back to Camp, dinner and overnight at Camp.

This day we will take you further toward the base Camp of Nanga Parbat up to Bayal, the trek will take about one hour. You will be having free time to walk around and explore the area by yourself. Overnight at tent.

Today we will trek back to Tato and take jeeps to Raikot bridge where coach will waiting to take us to Besham on the Karakorum Highway along the Indus, which divides the Karakorum and Himalayas as it enters Pakistan below Ladakh. During the journey the landscape changes almost after every 2nd mile. KKH passes through Shatial, Komila and Dassu. There are many ancient rock inscriptions along the way left by Chinese pilgrims and ancient travelers.  Out of these sites Chilas and Shatial is reachable easily and most of them are from 5th century A.D.

We will follow the West bank of Indus to Besham (altitude 850 m) a small transit village fast becoming a town. It is at the junction of Swat valley. A road goes West via scenic Shangla Pass into the Swat valley. Overnight at hotel.

Morning drive on KKH to Islamabad. En-route visit Taxila, 40 km north of Islamabad. Taxila ranks among the great archaeological finds of the world. Conquered by Alexander the Great in 327 BC, it progressed under the Mauryans and the Great Kushans and became a learning centre. Destroyed by the White Huns it finally fell to the first great Muslim conqueror, Mahmud of Ghazni in 1000 AD. We will leave the Indus River at Thakot by crossing a bridge and continue through Chatar plains, Mansehra and  Abbotabad. Upon arrival at Islamabad transfer to hotel for meals and overnight.

Day 12: Fly out
Transfer to airport for fly homeland

a. Accommodation as per the list provided
b. Meals, breakfast, lunch, dinner in Hotel and on the Trek.
c. Private air-Conditioned Transport for all ground Transfer,s.
d. 4WD Jeeps from Gilgit to Tarishing and Tarishing to Fairy Meadows.
e. Entrance fees to museum and sites during Tour.
f. Porters, cook helpers and Guide services.
g. 13kg baggage free per person on the Trek
h. Sleeping Tents on sharing bases, Mess Tent, kitchen Tent  etc.
i. Domestic air ticket, from Islamabad to Gilgit, if the weather clear and we cold Fly.

a. International airfares.
b. Personal sleeping bags, and personal nature clothing/equipments etc.
c. Extras at hotel, like drinks, laundry phone calls, etc.
d. Insurance liability and other under force majure conditions, medical aid.
e. Anything which is not mentioned at above given programme 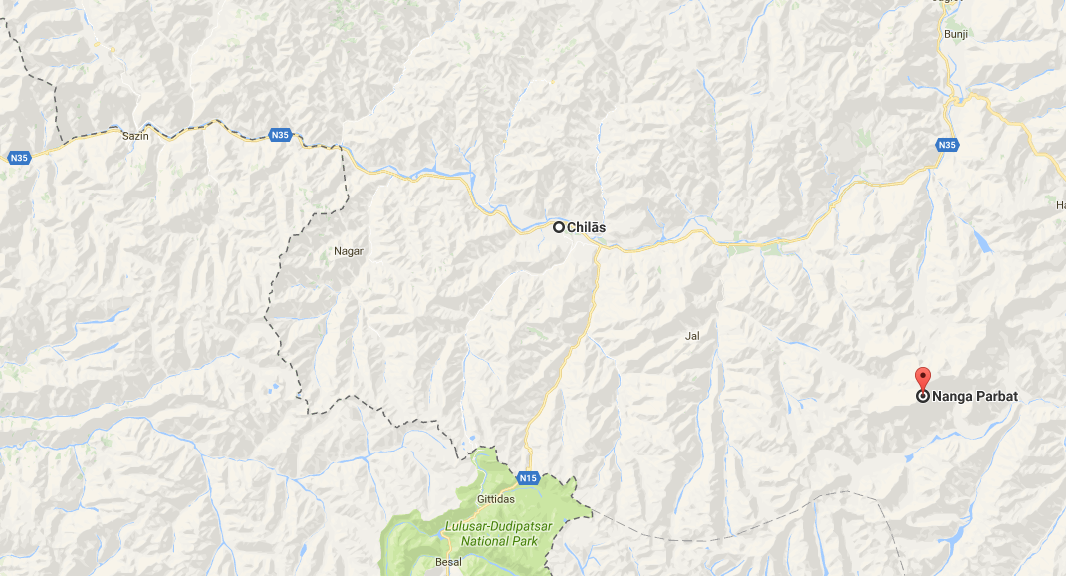 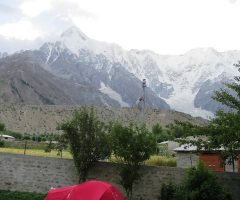 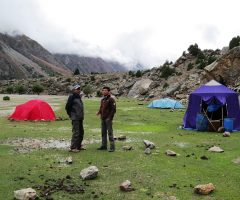 Camping at Latobhu during Rupal Trek 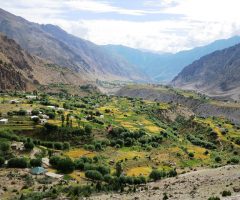 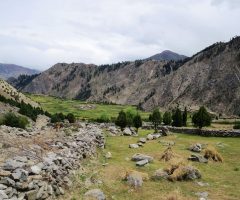 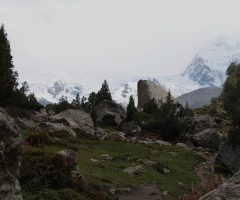 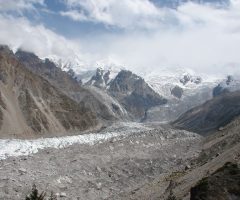 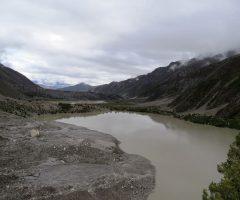 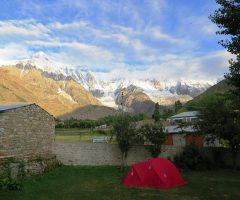 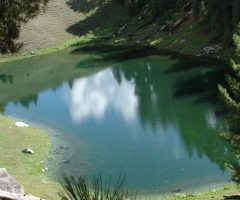 A small lake near Fairy Meadows 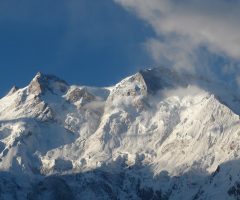